We had a visitor during one of the brief moments of 2020 when it was legal to meet people outside.

Christine is 60,has physical issues, and has never ridden a horse tack free before.

She is also VERY devoted to learning and implementing force free methods with her own horses, and therefore, I trust her around the BuckYou ponies, and suggested she had a go (if jango was up for it) riding truly force free. She said YES!

After nearly her entire life riding traditionally, and in more recent times, riding bitless, getting on a pony you’ve just met on open moors without so much as a lead rope took BIG OVARIES! Christine looked a tad apprehensive and clearly had a few thoughts about ending up as a smear on the fells, but she did it.

Jango was more than happy to line himself up at the block, for him, being ridden is just a fun game.

He is also quite sensitive to his rider and if he feels they are tense, he takes it slow or stops. He also hasn’t been ridden by anyone other than me  for months due to the covid!

So a combination of understandable tension, and Jango not understanding cues (she’s not doing them EXACTLY how you do, ma!) got us off to a slow start, but a little coaching and the introduction for Christine to one of Jango’s absolute favorite games- Throwing cones- got us moving nicely!

After a little practice getting the cues understood between them with the help of the cones, Christine was much more relaxed and was cuing Jango to walk on, halt and turn with NO TACK AT ALL!

Jango did however, attempt to investigate the camera cases of Steve, Christine’s husband/private photographer as they did look suspiciously like treat pouches…

After a while, I asked the crucial question: ‘D’ya fancy trying a canter?’

YES! Well, that was resounding!

We have approx zero flat ground, so not only was Christine putting her life in the hooves of a tackless pony, it was very hilly, steep ground…  We headed UP hill to a place where Jango and I frequently canter, he knows the landscape and the environment and what speed we usually go in these areas.

A couple of false starts- As I mentioned before, Jango will slow/stop if his rider feels tense, Christine relaxed- and had her first Tack Free canter on a Fully Charmed pony! The grin on her face was absolutely blinding!

I am looking forwards to seeing how this motivates Christine with her coblet Billy in their force free journey.

And for anyone else who dreams of this, it’s an achievable reality, drop me a message or check out Horse Charming 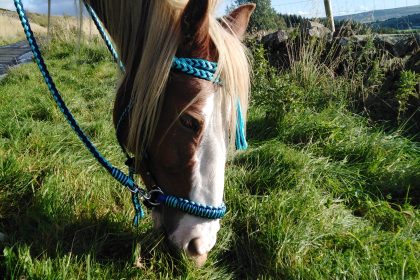 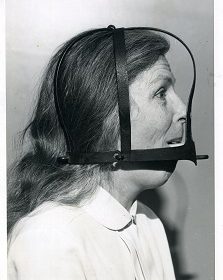 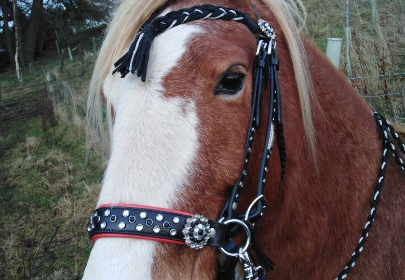