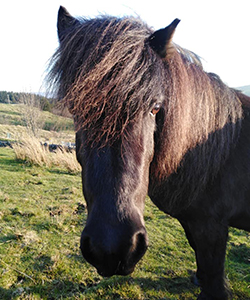 Spartacus is a very handsome 10.2 shetland gelding. He appeared on the scene in july 2016 after Zion (my o/h) said the immortal words:

You should get a shetland.

I take suggestions like this very seriously, and within a couple of weeks, Spartacus joined the herd.

I found him by searching ‘free to a good home’.

The reason I chose this way to find  a Shetland was because animals offered free to good homes generally don’t get good homes.

Nobody gives an animal away to a stranger for free if they care about what happens to that animal.

These poor beasts are at risk of any kind of awful fate. They are perceived as being throwaway, worthless, unimportant. They end up neglected and unloved.

That is why I chose this way to find my pony rather than buy one or go to a rescue.

The ponies in rescues are safe, they will be cared for until they find a home, when a potential home arises, that home will be vetted, the owners asked for references, the pony checked on, support offered when needed. Also, most rescues have a contract to say if the owner can no longer care for the horse, it should be returned to the rescue.

I was told Spartacus (then called Bertie) belonged to someone who was ill and no longer able to care for him, and the family couldn’t keep him.

I asked lots of questions about him, was told he had no history of laminitis, no issues. He hadn’t been back and was at that time, just turned 8.

I arranged for him to be collected and within a few days he joined my little herd for the cost of the transport!

The poor little dude was very shy and quiet at first, Cato was rather taken with him, Jango was quite bossy- he didn’t like another pony having Cato’s attention. 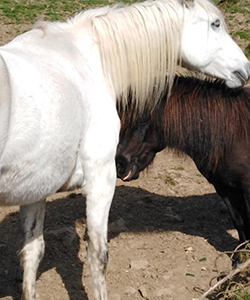 Sparti settled in very quickly, and I was very pleased to discover a very sharp little mind under that massive mane! He nailed a number of behaviours including targeting, cone hunting, Spanish walk and Football very quickly!

He had a few quirks we had to work on. The most important being his hoof handling. Sparti has a sticky stifle and a pigeon toe (please note earlier when I was assured he had no physical issues…) and this made holding his feet up for trims a bit tricky at best, quite painfull at worst.

We spent a long time working on this, and found ways to trim his feet without causing discomfort for him. For his hinds, this literally involves me sitting on the ground under him. So lovely in the mud and snow, but it really helps him feel safe and comfortable.

His other big concern was anyone standing by his side. He would move very deliberately to be facing you. He’d not been backed officially, but he’d been jumped on without warning, and when I saw how suspicious he was of children, it all made a lot of sense.

Again, I used horse charming, force-free science based methods to help him learn no one was going to jump on him, and enable him to feel safe, confident and in control.

Once sparti got the all-clear from a chiropractor, I started to gently get him used to the idea of being backed.

It was astonishingly easy as being a smart little guy, he’d see how many treats the bigger ponies got and he wanted in!

I was at the time borderline his weight limit, so when I did sit on him, I kept it super brief.

He was so enthusiastic about it though, I have a very vivid memory of asking him to walk on to a target and he wanting to get their faster and trotting while I wailed ‘NOOOOOO! I’m too heavy for you to do this!’

The determination and the cleverness of the shetland are great indeed!

He has also totally made Jango his bitch. About 3 months after moving in, Sparti decided he had taken enough of Jango’s shit (Jango was a little bossy with Sparti) and one day when I went out with Sparti’s head collar, Jango tried to get to it before Sparti. Sparti ROARED and threw himself at Jang0, who is considerably larger than Sparti, and Jango FLED!

Job done, Sparti came back to me, put on his head collar and said ‘Shall we?’

This was a big change to the group dynamic, but they remain very good friends to this day and play fight constantly, they are very entertaining to watch.

Sparti is a very playful pony, and he often tries to play biteyface with Cato, who just does a giraffe impression and ruins Sparti’s fun if he’s not in the mood.

Sparti also has a budding career as a Pit Pony. He has on a few occasions been down our local working coal mine!

It is a massive credit to the power of horse charming and force free training methods that he is such a confident and assured little pony that for him, going 300ft underground into a pitch black tunnel was exploring and fun, not terrifying and RUN AWAY!

There are plans for there to be open days with an authentic pit pony, assuming Sparti still approves. 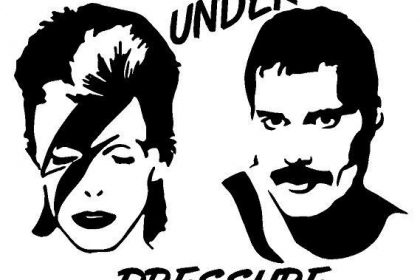 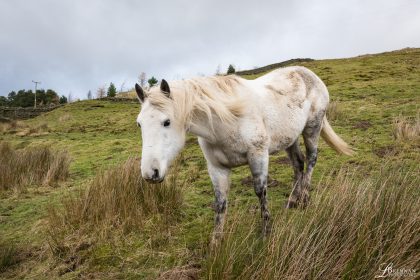