Well people, it’s been a frustrating task getting this blog written which I promised Vikki some days ago now.

Somewhere in the ether there are a number of failed attempts floating round courtesy of computer/phone glitches. But if it helps others understand a bit more about Buck You saddles, it will be worth it.
The problem is, it’s very baffling to understand how a saddle can be secure, fit different shapes without precise measurements supplied by the customer, and still fit if the horse changes that shape. It really sounds too good to be true, especially if you’ve just emerged from the virtual rabbit hole of saddle fitting research feeling overwhelmed (try this one.. that one…adjustable gullet. Bespoke made to measure…) and can’t quite believe the answer might be that simple. At least, that’s how I felt when I first took a look at the Buck You site. 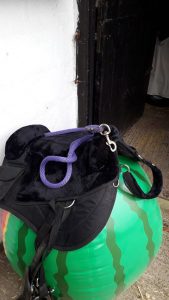 So, as a recent and very happy convert, to help potential customers, I did a little but outside the box thinking kind of experiment with my Welsh pony’s favourite toy (a giant inflatable watermelon).Bear with me here. It’s not too much unlike my cob Billy in shape, ha ha, so I took photos of it with my Buck You saddle on and his previous saddle, the Saddle from Hell.

A weird experiment, but take a closer look at the way the Buck You saddle moulds to even an extreme shape like this. The Saddle From Hell, however, is perched on top although it’s also treeless.  You can see how it totally fails to adjust. 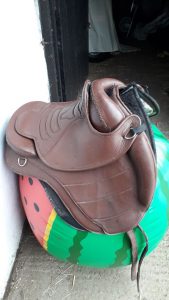 Riding on it felt like being on a small ship in a storm, it was awful but I blamed myself and my Riding. The unexpected element of this bit of photo silly was the interesting observation that I could place the Buck You on a round shape and it stayed there. With Saddle From Hell, it immediately started slipping and the ball rolled around. I could not balance it in the centre however hard I tried and had to prop the ball up with my foot. I felt a bit vindicated! If you are considering a Buck You saddle, hang in there, ask questions, keep an open mind. I would hate to think that someone somewhere could miss out on such a fantastic product. I am so happy with it, it’s been a real life changer for me. I was starting to get my confidence knocked at nearly 60 years old feeling so insecure and uncomfortable, and it can’t have been fun for my horse either. I was actually considering giving up altogether. Thanks Vikki, saddle saviour extraordinaire, for my Buck You saddle! Should I send more strange pictures?! 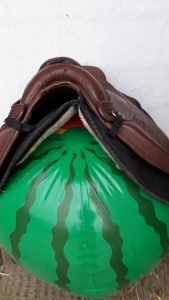 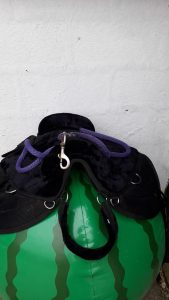 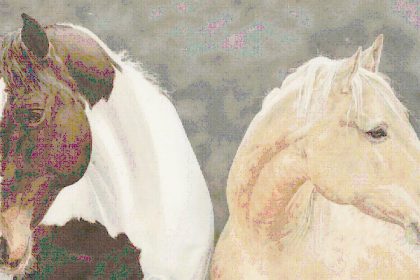 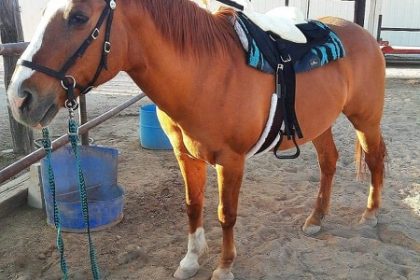 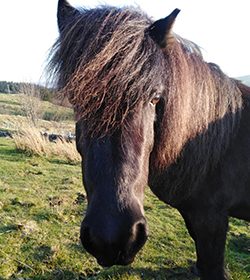